Is the Information Technology Revolution Over ? 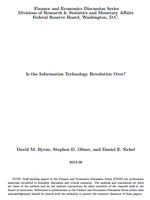 Is the Information Technology Revolution Over ?

This paper contributes three types of evidence to this debate.

First, we show that since 2004, IT has continued to make a significant contribution to labor productivity growth in the United States, though it is no longer providing the boost it did during the productivity resurgence from 1995 to 2004.

Second, we present evidence that semiconductor technology, a key ingredient of the IT revolution, has continued to advance at a rapid pace and that the BLS price index for microprocesssors may have substantially understated the rate of decline in prices in recent years.

Finally, we develop projections of growth in trend labor productivity in the nonfarm business sector.

The baseline projection of about 1¾ percent a year is better than recent history but is still below the long-run average of 2¼ percent.

However, we see a reasonable prospect--particularly given the ongoing advance in semiconductors--that the pace of labor productivity growth could rise back up to or exceed the long-run average. While the evidence is far from conclusive, we judge that "No, the IT revolution is not over."